Miracles and motivation.  These are the two words that best describe Chris & Deanna Homrich. Deanna’s childhood miracle would shape her foundation, her faith, and even her direction in real estate.  And Chris’ fateful experience fresh out of college would spark the motivation that would lead to several positions of prominence in the Fortune 500 world. Together, their paths converge today to form a dynamic team that helps people who are in transition.

Deanna grew up on Reelfoot Lake in Northwest Tennessee.  When she was in the 4th grade, she spilled hot grease down her right side, producing third degree burns over 30 percent of her body. While in the emergency room, her doctor, parents and grandparents were all praying over her.  She was told that she would need a series of painful skin grafts, but the outcome was actually very different.  She doesn’t have one scar from the incident today.  It’s a constant reminder that miracles do happen. That incident no doubt led Deanna to choose the first phase of her career, becoming a Physical Therapist.  The experience allowed her to give back, while showcasing her kind and nurturing personality. Turns out, her work in therapy would also prepare her well for real estate years later, giving her the positivity and patience her clients have come to love. And her clients aren’t the only ones.  In 1992, she met Chris, and they’ve been married now for over 25 years.

Chris grew up in Bay City, Michigan. It was through his Dad’s tenacity that Chris learned about personal responsibility and the right to own his destiny. So imagine hearing the words, “you don’t have what it takes”, as an ambitious young man who has just completed his MBA in Finance, and is out to conquer the world.  Chris Homrich listened intently as the Fortune 500 boss completed his first performance evaluation with those very words.  Then he vowed to prove him wrong. The rest of that story is, Chris went on to become Treasurer and Vice President of an even larger company, and 15 years later, that same boss applied for a job working for Chris.  And that’s when he learned that you should never accept someone else’s idea of your own worth. He has served in a variety of financial roles, including Treasurer, CFO and COO of several companies. His success stemmed from the fact that he made a decision to become something that he never had--a mentor. That continues to change his life, and the lives of others to this day.

Chris & Deanna have always had a passion for beautiful homes and a life of service, so they decided to match their talents and passions to become a real estate team for people in transition, appropriately known as Your Transition Agents. Today, they help people in transition so they can obtain a home and community more suited to their changing needs and lifestyle. They specialize in helping their clients integrate seamlessly and stress-free into their new Nashville home and community, even assisting with relocation efforts (both to and from the Nashville area). They possess a genuine care and concern for people in transition and the challenges they face.

When Chris and Deanna aren’t assisting their clients through their next transition, they are giving back to their community.  Chris is a Board Member and Treasurer of both Central Tennessee and State of Tennessee BACA organizations (Bikers Against Child Abuse). He and Deanna support the organization further by donating 5% of their real estate earnings. They are also rabid Nashville Predators fans, and enjoy the Nashville entertainment scene.  They love to travel with their two incredible daughters, Lauren and Anna.  As an extension of their ‘family first’ philosophy, they believe buying or selling a home is much more than a transaction--it’s a transition.

A rare find in Bent Creek. This home has a finished basement that is set up for entertainment and leads out to a fenced flat yard. 4970 sq ft living space, large owner su...

Looking for single story home with gorgeous views off the back covered porch? Highly popular Macon floor plan by D.R. Horton. 3 bedroom, 2 bath home backing up to the com...

BACK ON THE MARKET!!! Lovely Cottage-style home with all new carpet/engineered wood flooring in kitchen/utility room and all new paint. New Roof/HVAC in excellent conditi...

Under $200k in East Nashville!!! Third floor condo conveniently located and impeccably maintained This two year old condo is walking distance to Walden, The Fox, and a qu...

This parcel is part of a larger tract - see MLS # 2132281 - PARCELS CANNOT BE SEPARATED. This 4.64 tract has outbuildings including a pole barn, enclosed barn, electricit...

This parcel is part of a smaller tract w/outbuildings, barn, electricity, and septic system. See MLS # 2132280 - PARCELS ARE BEING SOLD TOGETHER AND CANNOT BE SEPARATED. ...

Information Is Believed To Be Accurate But Not Guaranteed. Some or all listings may or may not be listed by the office/agent presenting these featured properties. Copyright 2020 MTRMLS, Inc. RealTracs Solutions. 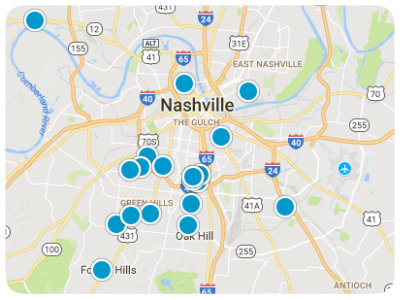